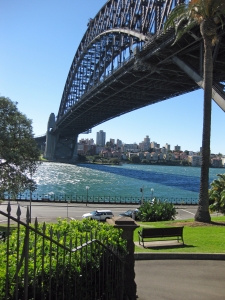 One of my friends from from middle school just accepted a job offer in Australia!  Of course, I found out through Facebook (isn’t that how most people keep in touch now, anyway?), but that’s still awesome.  We go way back.  I remember in middle school (this was in the mid 90s) we were both into the band Nirvana, and I was learning to play guitar and he was in choir, and so sometimes we’d get together and I’d play some Nirvana songs and he would sing.  It was awesome!  We were all like “we should start a band!”  Of course, in the 90s it wasn’t like now where everyone plays an instrument.  Outside of school band, there were only a few people who played instruments.  A couple times we joined up with a bass player and had some jam sessions, but nothing ever really became of it.

We still kept in touch during high school but then went away to different colleges.  A few years after we graduated when Facebook got all popular we reconnected again, found that we were living in the same city, and hung out a few times (no jam sessions, though).  It’s always really interesting to catch up with old friends.  He was working for a small startup company here that kind of wasn’t really going anywhere, and in the meantime he got an offer to go work in Australia, so he took it.  He’s super excited.  He said once he’s all settled in he’s going to throw a party and invite all his friends from back in the states.  The thing is, I live in an area where it’s very cold this time of year (it’s single digits today!), and Australia is really hot, right?  So I’ll probably have to find some cheap online clothing stores in Australia to get some appropriate clothing.  Australians love going to the beach, don’t they?  I don’t even think I own a pair of shorts.  So that may be an issue.

I’m kinda hoping he can get me a job there, too.  I have a job right now but I’m not really enjoying it that much and I don’t really see much room for growth.  And it’s not like people are just giving away jobs right now.  I mean, I’m very happy I have a job, don’t get me wrong, but it’s not what I see myself doing 2 or 3 years from now.  So eventually I’ll start looking for something else, anyway, and moving somewhere else sounds exciting!  I’d also love to move to England, although that could just be because I watch a lot of BBC and am assuming that’s how everything is over there.