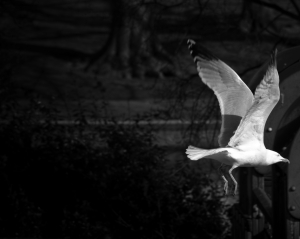 I try very hard to maintain solid friendships with people. I have a lot of friends, but a very small number of good friends (something I’m sure most of us sympathize with).

Someone I considered family to me, in the long run of our friendship, has just turned out to be a negative, unsupportive and unsympathetic friend.

Outside of friendships, with my dealings with random people I’m pretty brash and to the point. I’m always friendly, but honest to a fault. With my friends, I’m much more sensitive and cater to each of their personalities and listen the best I can. Some friends I have talk a lot, and it’s better for me to listen. Some need me to talk to help their brain sort through things. Whatever the situation I do the best I can to help my friends.

However with this person, I felt constantly put down. At one point in our friendship I was so frustrated and had reached my BS limit, I calmly explained to her how I felt. I was always greeted with the “I’m stressed out, I’m having this health issue, I’m having that kind of work issue”. Always an excuse for their poor behavior.

I went through a pretty substantial health issue in January and really needed the support of my close friends. I was struggling. I felt terrible. She had just started a relationship with one of my guy friends I had set her up with, and she told him my health situation. He, in turn, also being a terrible friend, told multiple people. She knew he gossiped my personal information and failed to tell me about it. She told other friends, without my knowledge, which I just recently found out as well.

Shortly after she had told multiple people my business (in late January, I think), she called me out of the blue and started taking jabs at me about how she felt she couldn’t trust me, how she felt I was a terrible friend and how she felt I needed to put more effort into the friendship. I was shocked, needless to say. She had started dating her boyfriend in ~November and completely fell off the face of the planet. I rarely saw her. Rarely heard from her. I’d make attempts to see her and plans fell through. I was blindsided by her phone call.

I put more effort into contacting her and asking how life was going. I was the one in and out of the hospital but making a point to stop and call her between doctors appointments. Every time I’d try and ask questions she’d stop me with “I don’t feel comfortable talking to you about personal things”. Well, what the f?

A few weeks later on my birthday, she never called. No text, no phone call, nothing. She knew when my birthday was. Her excuse? She was hungover. I was hurt. She had dictated to me how I needed to celebrate her birthday for her and I didn’t even get a text message.

Recently I moved across the country and she moved up to New York. Her relationship ended (poorly, I might add) and she needed emotional support. I had spoken with her maybe a handful of times after my birthday (she rarely responded to my attempts at communication) and she called me and cried to me about the relationship ending. I felt terrible. I was in the process of booking a ticket a couple of weeks before my cross-country move when she informed me that she had kept some substantial secrets from me.

I didn’t respond to her after that. It took me a few days to calmly collect my thoughts and send her a message regarding her poor friendship “skills”. I’m still angry about things. I no longer communicate with her… and to be quite honest I’m disgusted. She accused me of being a terrible friend, a liar, etc. After reflecting on it I realized maybe she was projecting what she saw in herself onto me? I’m not sure.

I feel like I spent more time consoling her emotionally and invested so much effort into saving a friendship only to have her… in essence (at least to me) betray my trust. That’s hard.

Did I make the best decision in cutting her out of my life? Does she deserve yet ANOTHER shot at forgiveness? I feel like I’ve handed her so many “get out of jail free” cards and overlooked some really petty, poor behaviors to try to see the positives. At this point I feel the friendship is more toxic and can no longer provide relief from personal stressors.

And that’s what I’ve decided to do — cut her out of my life.  She’s shady and our “friendship” was obviously one-sided.  I was obviously being used but she wasn’t giving me anything in return.  I don’t need that kind of added stress in my life.